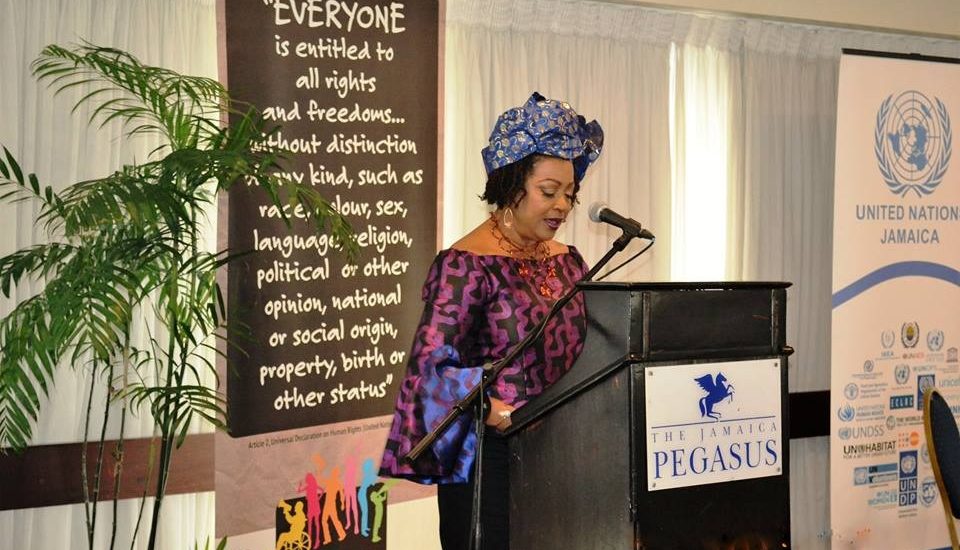 AMSTERDAM  — University of the West Indies (UWI) professor Verene Shepherd who in 2013 spoke out against the Dutch tradition of zwarte Piet, revealed over the weekend that she has since then continuously been the target of hate mail from people in the Netherlands who oppose changes to the embattled character blackface character. Speaking at a Human Rights Day event organized by UN Jamaica on Sunday she said that at a certain moment there was so much mail coming in for her that it crashed the university’s servers.

Shepherd was speaking as a former member of the United Nations (UN) Working Group of Experts on People of African Descent (WGEPAD), when she blatantly said at the end of a visit to the Netherlands in 2013 that zwarte Piet is a racist stereotype of black people.

In the Sinterklaas tradition, Zwarte Piet, who is supposed to be the faced helper of Saint Nicholas, is played by white people who use black paint or heavy black make up to blacken their skin, wear curly wigs, accented red lips and large earrings. The explanation is that his skin turns black from the soot from chimneys he climbs through to deliver gifts for children. Black people of course find that ridiculous, as one’s skin color does not turn fully black from climbing through chimneys; Furthermore, opponents have pointed out, the memory of this character is tied to the colonial history of the Netherlands, as the nature of the relationship between Black Pete and St Nicholas is one of servitude and inferiority of blacks to whites.

“He is not just a nice, jolly man. Maybe in the onset of the Sinterklaas tradition people did not realize that people of African descent would have problems with it , but this is the 21st century and people have indicated that they have a problem with it. Then it is time to talk about a change,” she said then.

The response was immediate, harsh and laced with racism and with contempt from white Dutch people for the outspoken black UN envoy. Dutch people who revere zwarte Piet as a treasured tradition voiced their disagreement with Shepherd in the most vile ways.  She was told to mind her own business and stay out of theirs.

At the Human Rights Day event last Sunday she said that her position did not change. “The zwarte Piet / black Pete Christmas celebration that is supposed to be a children’s festival, teaches children racism from an early age,” she said. She told her audience that she continues to be abused via the internet by people in the Netherlands, and showed a series of slides of the types of letters in which she was assaulted with racial slurs and images in which she was ridiculed, some as recent as October 2017. “This image in which I have been “blackpietized”, speaks volumes. But I guess I am in good company, based on these images in European media,” she said as her audience watched in disbelief as she showed images that portrayed Barack and Michele Obama, and French Guiana born Christiane Taubira, the former French Minister of Justice as monkeys.

Shepherd said that there was a time shortly after she spoke out in 2013, that she would get as many as 80 letters every day from people in the Netherlands. “My email account at the university had to be closed down for about two years because it crashed the system,” she grinned.

Shepherd’s speech did not just touch on the zwarte Piet matter. As it was Human Rights Day on December 10, she also addressed other examples of what she called “the global environment in which we live today and the racist practices that shill endure.” She mentioned cases that she worked on in Canada, Portugal, Sweden and Australia. “Ironically enough, Australia and Canada are two countries that have been lauded for their multicultural and open arms policies and strategies,” she said. She also spoke of the persecution of the Rohinhya people of Mianmar, the ongoing modern slavery practices that have been discovered in Libya and even broached the subject of discrimination in her native Jamaica.

This story appeared in The Daily Herald on December 14 2017