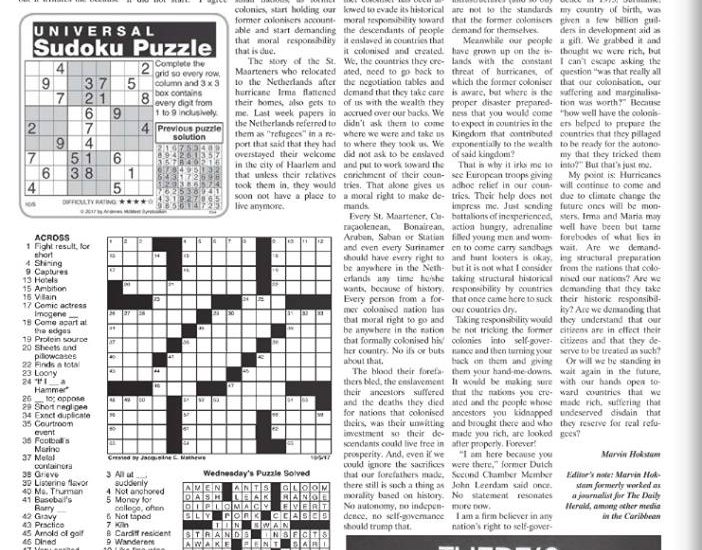 You know what gets to me the most these days? The stories about the heroics of the Dutch (French, British) marines who have been sent to the islands to assist in the aftermath of hurricanes Irma and Maria.

Don’t get me wrong; I appreciate that they are there, but it irritates me because in my view they are nothing but an insufficient patch on a gaping wound that was created by the former colonizers.

Prime Minister Skerrit of Dominica said it best, when he told the UN Assembly last week that his island “was on the front line of a war it did not start.” I agree with Mr. Skerrit. Climate change is taking a toll on our small nations that do not even make a dent in the earth’s health and therefore are not to blame for climate change.

But I believe this issue of the hurricanes goes farther than what the PM said. I believe that it is time our small nations, as former colonies, start holding our former colonizers accountable and start demanding that moral responsibility that is due.

The story of the St. Maarteners who relocated to the Netherlands after hurricane Irma flattened their homes, also gets to me. Last week papers in the Netherlands referred to them as “refugees” in a report that said that they had overstayed their welcome in the city of Haarlem and that unless their relatives took them in, they would soon not have a place to live anymore.

The answer: when this former colonizer has been allowed to evade its historical moral responsibility toward the descendants of people it enslaved in countries that it colonized and created. We, the countries they created, need to go back to the negotiation tables and demand that they take care of us with the wealth they accrued over our backs. We didn’t ask them to come where we were and take us to where they took us. We did not ask to be enslaved and put to work toward the enrichment of their countries. That alone gives us a moral right to make demands.

Every St. Maartener, Curacaolanean, Bonairean, Aruban, Saban or Statian and even every Surinamer should have every right to be anywhere in the Netherlands any time he/she wants, because of history. Every person from a former colonized nation has that moral right to go and be anywhere in the nation that formally colonized his/her country. No if or buts about that. The blood their forefathers bled, the enslavement their ancestors suffered and the deaths they died for nations that colonized theirs, was their unwitting investment so their descendants could live free in prosperity. And, even if we could ignore the sacrifices that our forefathers made, there still is such a thing as morality based on history.  No autonomy, no independence, no self-governance should trump that.

But we let the Netherlands sucker us into these statuses without demanding that all facilities and infrastructures that the former colonizer has in place for people in Europe were in place in our countries before they left. Things as minimal as our school systems, our medical facilities, our road infrastructures (and so on) are not to the standards that the former colonizers demand for themselves.

Meanwhile our people have grown up on the islands with the constant threat of hurricanes, of which the former colonizer is aware, but where is the proper disaster preparedness that you would come to expect in countries in the Kingdom that contributed exponentially to the wealth of said kingdom?

That is why it irks me to see European troops giving adhoc relief in our countries. Their help is appreciated but it does not impress me.  Just sending battalions of inexperienced, action hungry, adrenaline filled young men and women to come carry sandbags and hunt looters is okay, but it is not what I consider taking structural historical responsibility by countries that once came here to suck our countries dry.

Taking responsibility would be not tricking the former colonies into self-governance, then turning your back on them, giving them your hand-me-downs and letting them squabble over what you didn’t take from their countries. It would be making sure that the nations you created and the people whose ancestors you kidnapped and brought there and who made you rich, are looked after properly. Forever!

“I am here because you were there,” former Dutch Second Chamber Member John Leerdam said once. No statement resonates more now.

I am a firm believer in any nation’s right to self-governance, but at the same time I also believe that our former colonizers have a perpetual accountability and responsibility. In my opinion our nations gave these former colonizers an easy, cheap way out with inexpensive independences and autonomies.

When it gained independence in 1975, Suriname, my country of birth, was given a few billion guilders in development aid as a gift. We grabbed it and thought we were rich, but I can’t escape asking the question “was that really all that our colonization, our suffering and marginalization was worth?” Because “how well have the colonizers helped to prepare the countries that they pillaged to be ready for the autonomy that they tricked them into?”

But that’s just me.

My point is: Hurricanes will continue to come and due to climate change the future ones will be monsters. And geographically we are locked into the front line of a war that we did not start, while our small nations do not even make a dent in the earth’s health and therefore are not to blame for climate change.

Or will we be standing in wait again in the future, with our hands open toward countries that we made rich, suffering that undeserved disdain that they reserve for real refugees?

Marvin Hokstam formerly worked as a journalist for The Daily Herald, among other media in the Caribbean

This article appeared in The Daily Herald on October 5 2017