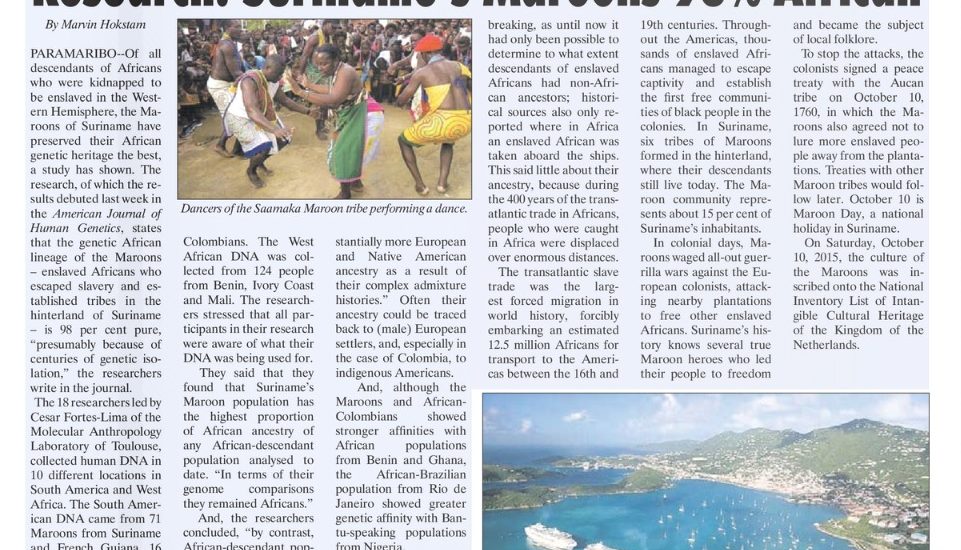 PARAMARIBO — Of all descendants of Africans who were kidnapped to be enslaved in the Western Hemisphere, the Maroons of Suriname have preserved their African genetic heritage the best, a study has shown. The research, of which the results debuted last week in the American Journal of Human Genetics, states that the genetic African lineage of the Maroons -enslaved Africans who escaped slavery and established tribes in the hinterland of Suriname- is 98 percent pure. “Presumably because of centuries of genetic isolation,” the researchers write in the journal.

The 18 researchers, led by Cesar Fortes-Lima of the Molecular Anthropology Laboratory of Toulouse, collected human DNA in ten different locations in op South America and West Africa. The South American DNA came from 71 Maroons from Suriname and French Guiana, 16 afro Brazilians from Rio de Janeiro and 20 afro Colombians. The West African DNA was collected from 124 people from Benin, Ivory Coast and Mali. The researchers stressed that all participants in their research were aware of what their DNA was being used for.

They said that they found that Suriname’s Maroon population has the highest proportion of African ancestry of any African-descendant population analyzed to date. “In terms of their gnome comparisons they remained Africans.”

And, the researchers concluded, “by contrast, African-descendant populations in Brazil and Colombia harbor substantially more European and Native American ancestry as a result of their complex admixture histories.” Often their ancestry could be traced back to (male) European settlers, and, especially in the case of Colombia, to indigenous Americans.

And, although the Marron and African-Colombians showed stronger affinities with African populations from Benin and Ghana, the African-Brazilian population from Rio de Janeiro showed greater genetic affinity with Bantu-speaking populations from Nigeria.

This makes the research results pretty groundbreaking, as until now it had only been possible to determine to what extent descendants of enslaved Africans had non-African ancestors; historical sources also only reported where in Africa an enslaved African was taken aboard the ships. This said little about their ancestry, because during the 400 years of the transatlantic trade in Africans, people who were caught in Africa were displaced over enormous distances.

The transatlantic slave trade was the largest forced migration in world history, forcibly embarking an estimated 12.5 million Africans for transport to the Americas between the sixteenth and nineteenth centuries. Throughout the Americas, thousands of enslaved Africans managed to escape captivity and establish the first free communities of black people in the colonies. In Suriname, six tribes of Maroons formed in the hinterland, where their descendants still live today. The Maroon community represents about 15 percent of Suriname’s inhabitants.

In colonial days, Maroons raged all out guerrilla wars against the European colonists, attacking nearby plantations to free other enslaved Africans. Suriname’s history knows several true Maroon heroes who led their people to freedom and became the subject of local folklore.

To stop the attacks, the colonists signed a peace treaty with the Aucan tribe on October 10th 1760, in which the Maroons also agreed not lure more enslaved people away from the plantations. Treaties with other Maroon tribes would follow later. October 10 is Maroon Day, a national holiday in Suriname.

On Saturday October 10 2015, the culture of the Maroons was inscribed onto the National Inventory List of Immaterial Heritage of the Kingdom of the Netherlands.

This article appeared in The Daily Herald on Nov 6 2017